Travelling is Racist; The Horrors of Old Stereotypes

by Willem Laurentzen on April 6, 2015 in Beyond AEGEE, Funny, Travel Guide

It was once said that the best way to spend your money would by travelling: for the insight, wisdom, joy and friendships you would get, experience and make is said to be priceless. While many people agree that travelling broadens the mind, it also narrows it in a certain way. For when you travel, you tend not to have enough time to really get to know the people you are travelling with. It is from these people, migrants, travellers, traders and other transients that we get stereotypes. Nowadays, there exist a great deal of these; the Germans are aggressive, the French are hedonistic cowards and the English have an obsession for tea like Gollum has one for “the one Ring to rule them all”. However, let us not be offensive and look at some long forgotten, historical stereotypes. Reader’s discretion, however, is still advised. The Swedes will take you at night

It seems weird to think of Swedish people as bad guys; they are currently amongst the top seven of most peaceful countries in the world, according to the Global Peace Index. However, at a certain point in history, there was nothing that would make entire German cities more frightened than the rumour that a Swedish army was marching towards them. During the Thirty Years’ War (1618-1648) almost all European countries were at war with each other for opportunism, freedom and religion, in a manner that could be said to be even more complicated and violent than the current conflict in Iraq and Syria. While there was conflict in Austria, Bohemia and the Low Countries, the bulk of the fighting and the senseless violence happened in the Holy Roman Empire, also known as Germany, where as much as two thirds of the population was exterminated.

One of the most senseless of these slaughters was the sack of Magdeburg (1630-1631), when the Swedish king Gustavus Adolphus let this German city he was allied with know that he and his army were on their way to relieve them from the Imperial troops that were about to assault the city. Instead, he marched south to attack the Bavarian city of Ingolstadt. The city of Magdeburg was eventually taken and burned to the ground. No less than eighty-five percent of its population was killed during the firestorm. For its military ravages in Bavaria and for letting the total destruction of Magdeburg happen, the Swedish were often depicted as the bad guys in children’s stories and songs. Until the 1980s German children were put to bed with the warning that, if they would not go to sleep, the Swedish would come and take them.

The Portuguese have syphilis

Syphilis is one of those diseases you give to the ones you love, or at least to the ones you make love to. However, regardless of the pleasure it may have given those who have spread the disease, having syphilis remains a pretty nasty condition. The disease itself is only sexually transmitted and has originated from the Americas until it was spread to Europe by Spanish conquistadors, who may have had less than consensual sex with the natives of the New World. From that moment on, the disease spread amongst soldiers and sailors (the same people who created stereotypes), prostitutes, and then bachelors or even married men, until finally it was spread amongst people from all walks of life: even kings and queens. That is not to say that everybody had syphilis, but it was common enough for people to know what it was, where it came from and which kind of people were most likely to carry the disease with them. 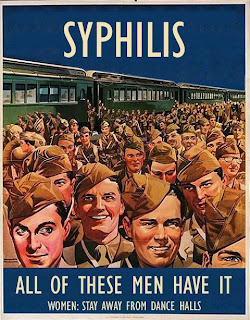 Instead of blaming the disease on their soldiers or adulterous partners, when the only treatment was ingesting poisonous mercury, however, the people of Europe thought it better to do something else. Countries back then began to blame countries they disliked for causing and spreading the disease. The Dutch, then at war with Spain and Portugal, called it the Portuguese disease, the French called it the English disease and the English and Germans called it the French disease. The then German city of Strasbourg had even called the part of the city, where the syphilis patients were treated, the ‘French quarter’.

Jews will steal your babies

Jewish people have had a bad reputation throughout history. Because they have been a transient people after their banishment from Judea and because they refused to integrate into their host countries in order to maintain their Jewish culture and customs, they have often been looked down upon. Many times they have been used as a scapegoat during times of civil unrest, have their money and property taken, seen people of their community being killed and in some cases they have been banished to special ghettos, other cities or even other countries. In fact, it was not until after the Holocaust and the decline of nationalism in the twentieth century that they were accepted in at least certain parts of the world.

Before the rise of Nazism, however, the Jews in some countries were seen as vile creatures, so low that the term Untermensch would give them too much credit. To some, Jews were seen as creatures that would pass as people, but really were not. They would try to trick ordinary people into buying shady merchandise or borrowing money with so much interest that the ordinary people could never be able to pay it back, and thus have to sell themselves and their family as slaves to the Jew.

Another story would for instance be that of noblemen taking Jewish people in as (financial) advisers only to have their wealth and happiness taken away by them in the end. The most pervasive story about Jewish people, however, are the ones everybody nowadays still knows without realising it. This portrays Jewish people as lower creatures that seek a deal in order to steal a Christian baby and raise it as their own in order to corrupt its mind. This is no unknown story, this is the plot point of Rumpelstiltskin. Just like in early modern Europe there is an authority (a king) that demands taxation or payment (hay spun into gold). There is also a Christian woman (the miller’s daughter), who is so poor she must borrow money from a Jewish loaner (Rumpelstiltskin creating gold out of hay or basically something worthless and therefore mothering) who demands something, normally interest, in return for all of this money. This is the point where the stereotype takes over and the Jewish man (the imp-like Rumpelstiltskin) demands the woman’s first-born as his own. A final chance is offered by guessing his name, which she cannot at first, because in reality Jewish names are different from those of Christians because of their different language and customs (Albeit that Rumpelstiltskin does not sound Hebrew at all).

There are many fairy tales that secretly depict stereotypes, whether it would be the Jewish people in the case of Rumpelstiltskin or possibly the shady merchant in Jack and the Beanstalk or foreigners such as the Pied Piper (of Hamelin) or the Swedish people in the German bedtime stories. It is interesting to see that these stereotypes have existed, but also how travelling and meeting travellers and transients created them. Do not give up any vacation plans yet, however. For even though it might be these short interactions between cultures, it is also curiosity, like that in the most engaging of travellers, that ultimately dispels them.