by admin on December 6, 2009 in Uncategorized

During the past two weeks I had the pleasure of escaping from the CD for some time for two things. I will now give a short report on them, the European Day of Languages in Aachen and a training day on the new bookkeeping software of AEGEE-Europe.
Part 1: Languages
On Thursday 26th of November the AEGEE network was celebrating its yearly European Day of Languages. I was invited by AEGEE-Aachen to come to their event and give a short introduction course on Esperanto*. I travelled together with Agnes, as she was to leave from Aachen on Friday morning to the Network Meeting in Hamburg. We took the train from Brussels to Hergenrath. This is the last village before the German border, where Patrick would pick us up by car. The reason is that a train ticket Brussels-Hergenrath costs € 5,- (for 145km), and that you pay another € 5,- for the part Hergenrath-Aachen, which is only 8 km. This to show that there is still some work to be done European integration when it comes to cross-border train traffic.
The EDL in Aachen was well organised, there were a dozen of short languages courses on a wide range of language, open for all students. It’s a pity that the amount of participants was not very high, although there were a lot of posters and flyers spread around the university. My workshop was visited by 5 persons, which is not a huge amount, but the lack in quantity was compensated by the quality. The participants were very interested and posed some good questions about Esperanto. 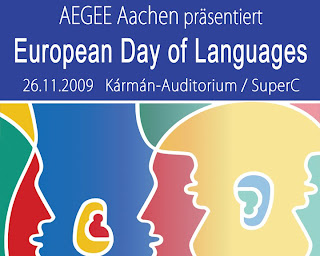 After the course it was time to visit the Christmas Market with some AEGEE-Aachen people. The cold weather was compensated by some nice glühwein and the ferry tale atmosphere of all the Christmas merchandise sold on the street. The next morning I did some sightseeing in Aachen with Ioana from AEGEE-Brussel-Bruxelles, who had been one of the participants of my course, and we went back to Brussels by train.
* If you don’t know what Esperanto is or want to know more about it, go to www.esperanto.net or en.wikipedia.org/wiki/Esperanto.
Part 2: Numbers
Last Thursday, the 3rd of December I had a training day provided by the company where we bought new software to do our bookkeeping. The company is located in the edge of Brussels, but unfortunately the training took place somewhere else, as I found out when I read the invitation email again the night before it. The location was a regional education complex located a few kilometres outside of a village 15 km from Brussels. This means more or less that it on the end of the world if you want to reach it from the CD house not going by car.
To solve this problem I took a Dutch approach. I went by bike to the train station in Brussels, took it with me in the train, and then used it again to reach the location from the nearest station in the village. The day itself was very useful and interesting. The demonstration of all important functionalities of the software and how to get started with it was primarily directed to a public of Flemish small entrepreneurs, but nevertheless also my question related to the more specific situation of AEGEE were answered. The only downside of the software I found out is that is can import and export bank transactions directly to and from the internet banking module, but this is limited to Belgian domestic transfers. For AEGEE that means less then 20% of our transactions. Luckily the software upgrade for all transactions within the SEPA area should be ready soon.
As I said before, it was a useful day, not only for the finances of AEGEE-Europe, but it also made me a lot more familiar with the Flemish variant of the Dutch language :).
Nico